← Return to all posts

I haven’t posted anything in a while, and rather than trying to write about maths, I wanted to just share some lovely photos of Skomer island (which I recently visited). I am even less knowledgeable about birds than I am about maths, but I do love them, and this was the first time in my life that I’d actually seen a puffin in the flesh!

I am from North Devon, and just off the coast there is a small island called Lundy, which has a very interesting history, but is also famous for being the home to one of the few Atlantic puffin colonies in the British Isles.1 In the last few decades, sadly, the number of breeding pairs of puffins has been in sharp decline, and when I went over there about 10 years ago I didn’t see a single one. Thanks to lots of work by dedicated volunteers, it seems like the puffin population of Lundy is slowly on the rise again, and so hopefully the future will see the return of Lundy as a puffin sanctuary.

Just off the west coast of Wales, in Pembrokeshire, there is another island famous for its fauna: Skomer. As well as housing about half of the world’s population of Manx shearwaters2, being the unique home of the Skomer vole, and having numerous other species of birds, seals, and rabbits, it also has the largest puffin colony in southern Britain.

Puffins are extremely cute3 birds who mate for life, returning to the same burrows each year in order to find their partner, mate, and then leave (flying solo to the northern seas) for six or seven months, before coming back the next April. To quote from the Wikipedia article,

Spending the autumn and winter in the open ocean of the cold northern seas, the Atlantic puffin returns to coastal areas at the start of the breeding season in late spring. It nests in clifftop colonies, digging a burrow in which a single white egg is laid. The chick mostly feeds on whole fish and grows rapidly. After about 6 weeks, it is fully fledged and makes its way at night to the sea. It swims away from the shore and does not return to land for several years.

As of 2015, the Atlantic puffin is rated ‘vulnerable’ by the International Union for the Conservation of Nature, and was reported as being ‘threatened with extinction’ by BirdLife International in 2018. 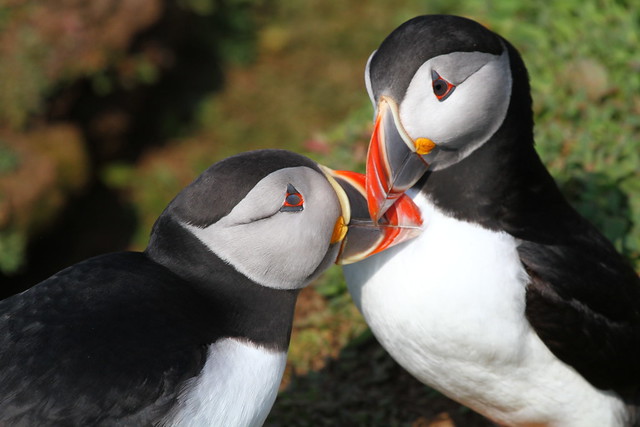